from I Came Up With Better Songs for Five Motern Media Titles, OK? by The Other Strange Man 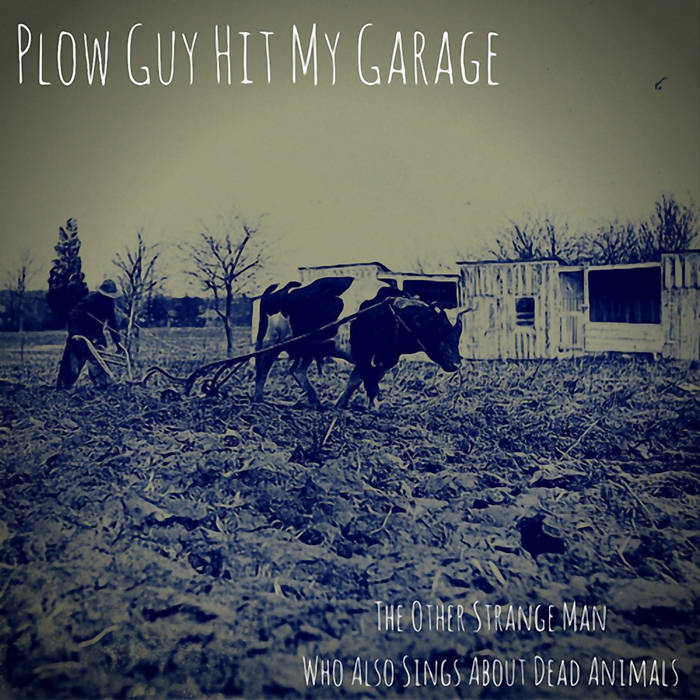 A delightful tale of dark horror and revenge, geared towards people who like gravely voices!

Title (and nothing else) from Motern Media's "Plow Guy Hit My Garage" by Matt Motern Manly Man off of the album "Joyous Cackle."

Like dear dead dad I'm also a banker
And like him I despise a deadbeat
If you borrow my money, then you pay your debts
It's a hard world, you've got to be strong to compete

And then my radio turns on…

Everything is dark, there's no moon, no stars
But the plow, does it shine its own light?
The man and his ox approach my garage
Direct, like a man with home in sight

"What madness are you," I yell at the man
As the ox reaches the garage wall
Then passes right through like the wind through the air
Not stopped by the boundary at all

But then the plow hits, and I feel the house tremble
It ruptures the wall like a pin to the eye
The plow creates a hole, and the man goes in after
Outside, only darkness is left in the sky

It's just some strange trick, I know that for sure
I grab my gun for extra courage
I yell out a warning, race out of my house
And plunge through the breach into the garage

And in tonight's news, a mysterious death in the wealthy Farmer's Glen gated community.  The victim’s body -- which police would only describe as 'gruesome' -- was found buried in a shallow grave under the torn-up floor of his garage.  Strangely, although neighbors were home at the time that police say the murder occurred, no one reported anything suspicious.

Police have their work cut out for them.  Revenge is one possible motive, as the victim's bank has tossed many local families out of their homes.  Or this may have been a simple robbery, as a rare Jackson Model C was taken from the victim's garage.  Oddly, a rusted out plow and a complete set of ox bones appear to have been left in its place.

The Other Strange Man

I write songs inspired by Motern Media and the various artists who ascribe to the Motern philosophy.

I also have music on other subjects released under several other names.

Bandcamp Daily  your guide to the world of Bandcamp