I Came Up With Better Songs for Five Motern Media Titles, OK?

by The Other Strange Man 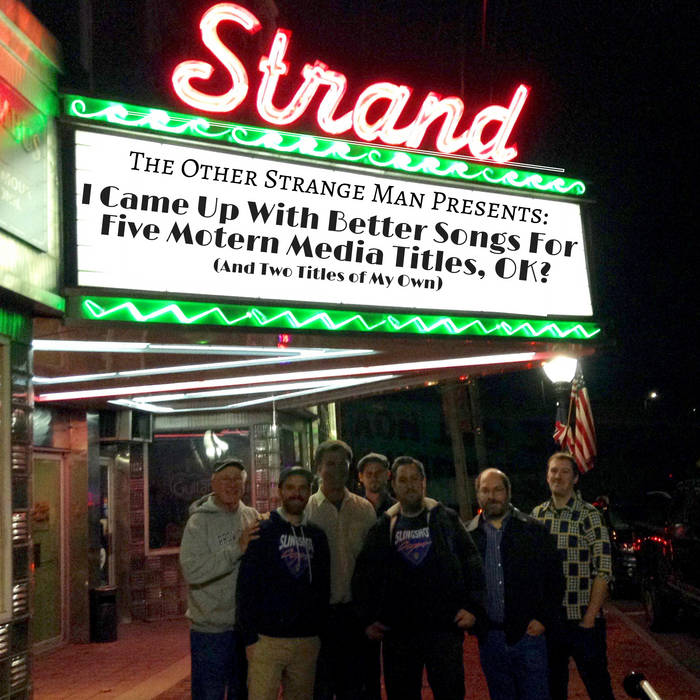 Matt Farley of Motern Media (third from left in the album-cover photo) is a media machine. He's recorded and released over 18,000 songs as of this writing, many of which are truly excellent. He's also made several films; for example, this photo was taken at the premiere of his movie "Slingshot Cops."

In honor of Matt, in late 2016 I wrote a series of four songs based upon titles from his vast catalog, which are presented here as tracks 1-4. These songs are wholly original in lyrics and music; the only thing I borrowed from Matt (with his permission) are the titles themselves.

Track 5 also uses a Motern Media song title, but was done earlier (in mid-2016) when I needed inspiration to complete a quick 1-hour songwriting challenge.

Track 6 was inspired by the birth of Matt's first son a few years ago.

Track 7 is the opening track in a musical I started writing a while ago based on Matt's story. The project has been dormant lately, but who knows, I may return to it some day.

All songs written and performed and copyrighted by The Other Strange Man / Odilon Green.

The Other Strange Man

I write songs inspired by Motern Media and the various artists who ascribe to the Motern philosophy.

I also have music on other subjects released under several other names.

Bandcamp Daily  your guide to the world of Bandcamp